MADE IT TO DESSERT WITH A VOUVRAY 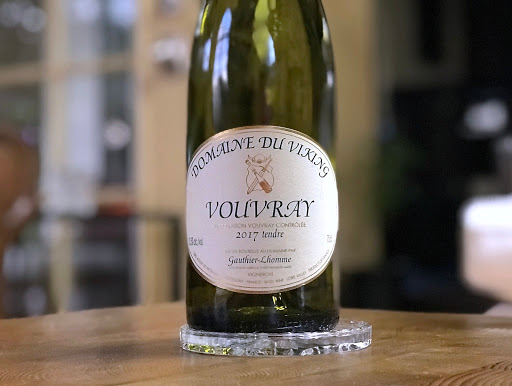 In August 2020 the French Winophiles are having a bit of a free-for-all in the Loire Valley! Jill Barth is hosting this month, don't miss her invite post. The options in the Loire are endless. Red, whites, rosés, sparkling wines, pétillant naturel, dessert wines, the Loire offers it all. We were to select whichever wine(s) we fancied, and we've got quite an inspiring list from everyone. Check it out below, and then join us on 15 August at 8 AM PST to talk about Loire wines on Twitter under #winophiles.
LOIRE WINES + VOUVRAY 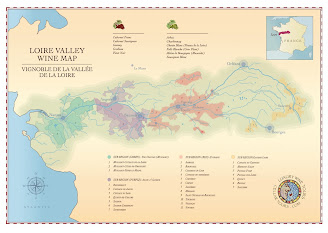 The Loire Valley wine region is along the Loire River and stretches from north central France to the Atlantic coast. The region has tremendous natural beauty, gorgeous châteaux, and a long history of winemaking, since the Romans planted grapevines there in the 1st century AD. Loire wines at one point were considered the most prestigious, even more than Bordeaux. A majority of the wine is white, although red wine from Cabernet Franc is also made in some areas. After Champagne, Loire is the second largest region for sparkling wine - crémant. It is also a very diverse wine region that offers exceptionally food friendly wines that are a true expression of their terroir and varietal due to no oak aging. It is a truly vast and varied wine region, sure to have something for every palate!
Each area in Loire has distinct characteristics and is known for certain wines. Almost all ~5,500 acres of Vouvray AOC, near the city of Tours, for example, are dedicated to the Chenin Blanc grape. Chenin Blanc is a high acid grape known locally as Pineau de la Loire and is believed to have originated in the Anjou wine region of Loire sometime in the 9th century. From there it eventually migrated to Vouvray. Vouvray white wines (Chenin Blanc) are categorised as sec, demi-sec, and molleux, and doux depending on acidity and residual sugar. Vouvrays from good vintages have aging potential, although they are also excellent without significant aging. Whatever the style of Vouvray wine, the one common characteristic amongst the wines is freshness/crispness.
For all that the region contributes to French and global culture, the Loire Valley was added to UNESCO’ World Heritage list in 2000. It is an area of France worth visiting regardless of any distinctions.
THE WINERY + THE WINE
DOMAINE DU VIKING
In the early part of the 20th century, most of Vouvray (like much of viticultural France) was worked by farmers in polyculture. Cows, sheep, and grain were raised alongside vines. Such was the case for the land belonging to Lionel and Francoise Gauthier, the owners of Domaine du Viking. Francoise’s grandparents owned just 2 hectares of vines in the early 1940’s along with animals and grain crops. As is still the case in many areas of France, winemaking was primarily for family and local consumption. Until August 11, 1944 when Francoise’s grandfather, Maurice, was killed by Nazi soldiers after being caught trying to blow up some train tracks. His son, Francoise’s father, was suddenly in charge and in an effort to keep the family afloat, converted all of the land into vineyards. The family haven't looked back since then! 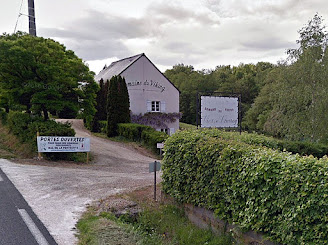 Most of the Domaine's 13 hectares are not on the famous chalk (tuffeau) soils that make up over 90% of Vouvray, but on the hard flinty soils of the northern tip of the appellation. Soils that produce crisp, mineral, and age-worthy Vouvrays.
As shown in the Google street view shot I took, the winery is more of a garage, although they do host tastings there. Domaine du Viking is also quite well known for its sparkling wines, made with the expertise acquired through Marcel L'Homme, the third generation of a family of farmers and vine growers.
2017 Domaine du Viking Vouvray Tendre
13.5% ABV | SRP $14
100% Chenin Blanc 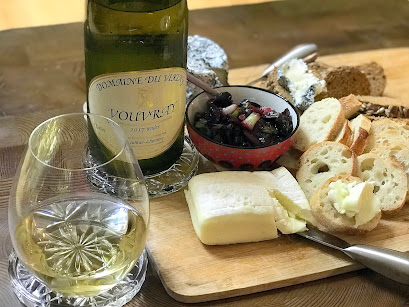 Soil:
Flint soils of Reugny rather than the more typical tuffeau soils further to the south and west in Vouvray
Vinification:
Grapes from 50-60 year old vines, hand harvested and hand sorted, pressed and fermented by native yeasts. Aged in tank for at least 12 months before release.
Colour:
Medium yellow
Nose:
White flowers, lemon zest, baked apples, a faint earthiness
Palate:
Sweet white flowers, lemon zest, baked apples, a faint earthiness, and a delightful stony minerality on the finish. Off-dry with a juicy acidity and pleasant amount of residual sugar without being cloying. Medium body and finish, overall a really delicious wine after 3 years in bottle... could perhaps be fine for a while but I'm not sure it would benefit greatly from further aging.
Pairing:
We had a very late lunch so we weren't hungry at dinner but by the time 9.30 PM came around we were a bit peckish so we decided to make it a light meal. We enjoyed this wine with two different but similar cheeses... a Fromager d'Affinois Brebicet from Rhône-Alps and a geo-rind MonS Mary dans les Étoiles cheese. Along with a black cherry-charred scallion relish (recipe below), a slathering of raw honey, a sunflower seed loaf, and a baguette.
The MonS Mary dans les Étoiles is a gorgeous goat's milk cheese with a rind of Geotrichum candidum (a mold-like yeast also used in Loire cheeses). It is a creamy cheese with a fresh citrusy, savoury vegetal flavour. The Brebicet is a sheep's milk cheese with a similar consistency to Brie but slightly more pronounced aromas. Can best be described as a sheep's milk Brie.
Black Cherry-Scallion Relish
makes 1 cup
- 4 scallions, cleaned
- 1 tbsp chopped green scallion tops
- 1-1/2 cups black cherries, pitted and quartered
- 2 tbsp olive oil
- 2 tsp white wine vinegar
- 1/2 tsp salt
- 1/2 tsp pepper
Posted by Payal at 3:39 PM