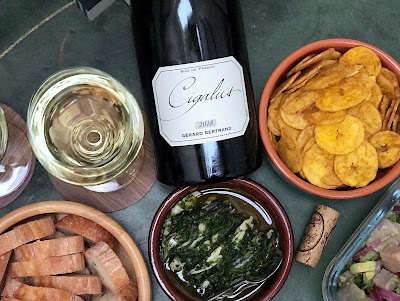 This month in May the #winophiles focussed on Languedoc-Roussillon in southern France, hosted by LM Archer. A lucky few of us received samples from Gérard Bertrand, who makes biodynamic wines at his Demeter certified winery in the Aude department of Occitanie in Languedoc-Roussillon.

The present-day region of Aude has done a lot: been inhabited since 1,500,000 BC, site of Europe's oldest human skull, lived through the usual European tumult of the Greeks, Romans, even Arabs for a while, but also benefitted from the "civilisation" part of each of these groups who brought viticulture, agriculture, cuisine, art, architecture, and cultural diversity. 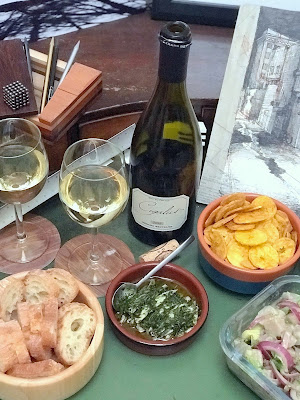 The Greeks planted the first vines in Aude in the 1st century, but the industry really only caught on in the early 19th century. Around the same time as the French architect and theorist Viollet-le-Duc (1814-1879), who was not a formally trained architect but spent more than half of his career restoring Gothic-era castles, cathedrals, and public buildings, including the Notre Dame de Paris and the city walls of Carcassonne in the Aude. He is considered one of the first theorists of current architecture and historic preservation practices, a proponent of using restoration materials that inform the function of the structure rather than simply duplicating what was there. His theories of honest structural integrity and creative interpretation over exact replication made him a controversial figure and he continues to be so, hotly debated by all of us in historic preservation and engineering. When designing replacements for the statues at the top of the Notre Dame de Paris, he precociously designed Saint Thomas to resemble himself. The statue is there for all to see!

A third of the land in Aude is now planted with grape vines, although Aude/Languedoc-Roussillon might not be the first wine region you think of in France. But vintners like Gérard Bertrand are bringing more of a sense of place to the wines there, and making creative wines "of the land" through biodynamic practices rather than recreating what was already being made there. Much like V.-l.-Duc's writings and practices that inform but aren't the same as our evolving approaches to restoration and theories of historic preservation. E.g. in the reconstruction of the Notre Dame de Paris roof that will never be rebuilt to what was there when it burnt - which was already not original - but rather it will be rebuilt to remind us of what was there while also being foremost a roof. Considering how much Aude has lived from prehistoric man to V.-l.-Duc and forward thinkers like Gérard Bertrand and his biodynamic ways in the single largest wine growing region in the world, we can agree that Aude and Languedoc-Roussillon continue to be alive in more ways than wine!

According to the GB website, "Cigalus enjoys a hot, sunny Mediterranean climate (described as “semi-arid with temperate spring variants”) ensuring early ripening of all the grape varieties. This arid climate (low rainfall) is offset by the very deep soils (sediments deposited by the Aussou, a stream at the edge of the estate) which store the winter rains for longer but which are less fertile due to the presence of a slightly chalky sandstone in the subsoil, dating back to the Campanian (secondary era, prior to the emergence of the Pyrenees). LABEL DEMETER" 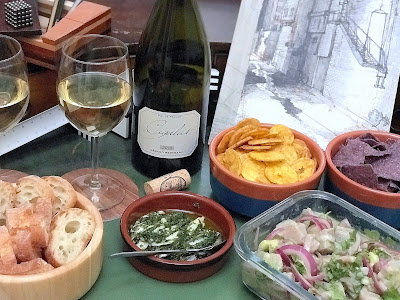 WINE: The wine, a blend of chardonnay, sauvignon blanc, and viognier, is a beautiful pale gold colour with lightly viscous tears, aromas of ripe citrus, citrus peel, white stone fruit, toast, honey on the nose. On the palate the wine is supple and silky with an unctuous mouthfeel and notes of butter in addition to the same aromas as on the nose. See the Tech Sheet for the winery's biodynamic approach to this wine, and other information.

PAIRING: We paired the wine with acciughe al verde, or anchovies in green sauce. The salty anchovies and the herbal sauce are a match made in heaven for a wine like the Cigalus Blanc. The acidity of the wine walks with the brininess of the anchovies and the oak aging helps tone down each bite while the citrus enhances the light fruity olive oil and the salty fish. Fun Fact: This classic Piemontese snack is a hark back to the days when salt was smuggled through France and Italy in creative ways including by hiding in layers of anchovies under the pretext of preserving them. The heavily salted anchovies that we desalinate before using today, were a way to smuggle salt in to Italy where it was in demand amongst the rich. Salt was the truffle of the 18th/19th century!

We also had a delightful tuna ceviche which went splendidly with the wine. The occasional heat of the green chiles de arbol in the ceviche was a nice surprise soothed by bits of avocado. Fun Fact: Chiles de arbol are commonly used dried in Mexican cookery but in regional Indian cuisine they are used in all their green splendor in all manner of ways including just biting into them with a meal. It's hard to believe that chiles came to India relatively recently, through the Portuguese via Spain via Mexico where they are native. Potatoes and tomatoes are equally foreign ingredients that are now well integrated into all types of Indian cuisine.

Check out the other #winophiles thoughts on Languedoc-Roussillon wines!
Posted by Payal at 1:20 PM