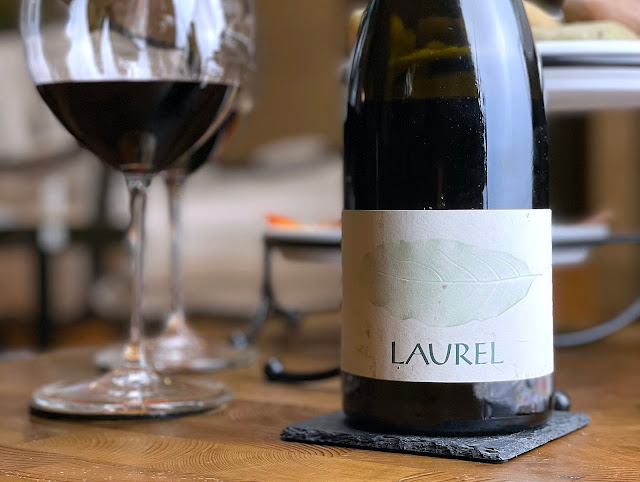 This month - February 2021 - the World Wine Travel group is exploring the wines of Catalonia, Spain. Between reds, whites, and Cavas coming from this corner of Spain, there's a vast variety of wines to choose from for any occasion and we had a field day deciding on a wine for this review before ultimately settling on a unique wine from an equally unique part of Catalonia. See the overview in host Susannah's preview post and join us on Twitter under #WorldWineTravel on 27 February 2021 at 8 AM PST to talk about all things Catalan wine.
CATALONIA (CATALUNYA) + PRIORAT
Catalonia is in the northeast corner of Spain bordering France to the north and the Mediterranean sea to the east. There are four Catalonian provinces, of which Barcelona might be the most readily known globally.
Priorat is in Tarragona province in  southwest Catalonia, however, and is a Denominació d'Origen Qualificada (DOQ) for Catalan wines produced in Priorat county. The DOQ covers 11 municipalities that primarily produce intense, full-bodied red wines, and was relatively obscure to the wine world until the 1990s.
Priorat DOQ includes the valleys of the rivers Siurana and Montsant, and vineyards are planted on terraced slopes at altitudes between 100m and 700m above sea level. Priorat summers are long, hot and dry while winters are cold with occasional frost, hailstones, and drought. The area is characterised by its unique terroir of volcanic soil comprising black slate and quartz, known as llicorella.
The traditional grape variety grown in Priorat is Grenache, found in all the older vineyards. Amongst other red varietals allowed are: Garnacha Peluda, Carignan (or Samsó), Cabernet Franc, Cabernet Sauvignon, Merlot, Pinot Noir, and Syrah. White varieties allowed are: Garnacha blanca, Macabeo, Pedro Ximénez, Chenin Blanc, Moscatel de Alejandría, Moscatel de Grano Menudo, Pansal, Picapoll Blanco, and Viognier.
Along with Rioja DOCa, Priorat is one of only two wine regions in Spain to qualify as DOCa (Denominación de Origen Calificada), the highest qualification level for a wine region within Spanish wine regulations. Priorat wines are absolutely worth the effort and price but can also offer terrific QPR!
CLOS I TERRASSES 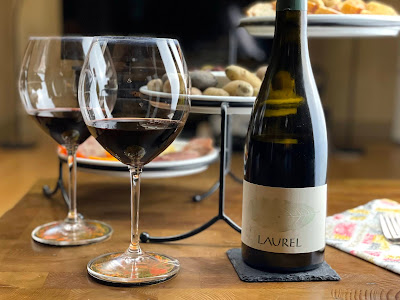 As James Russell Lowell said, "Fate loves the fearless". In 1988 a young Daphne Glorian, along with René Barbier, Álvaro Palacios, Carles Pastrana, and Josep Lluís Pérez pooled resources to purchase 17 terraces of vines situated ~400m above sea level in a wooded hollow just outside the village of Gratallops in Priorat, Spain, a rugged and wild region rich in history, poor in soil, and largely unknown outside Catalonia.
Fast forward to today, when Daphne's wines have evolved to become some of the most sought-after references for the Priorat region and some of the most desired wines in the world. Since 2004 all of the Clos I Terrasses vineyards are certified organic  with biodynamic practices.
2015 Clos I Terrasses "Laurel"
80% Grenache, 15% Syrah, 5% Cabernet Sauvignon
15% ABV | SRP $45
Sourced from 3 small vineyards in Gratallops and aged in amphorae and oak, Laurel is a blend of Grenache, Syrah, and Cabernet Sauvignon. It is Clos I Terrasses’ second wine (the first and most well known being Clos Erasmus), made from the grapes from younger vines, or the occasional declassified barrel of Clos Erasmus. Nevertheless, it is a dense, concentrated Priorat wine with tremendous aging potential and perhaps it is inaccurate to call it a second wine because it really is in its own league.
Colour:
Medium ruby
Nose:
Black and red fruit, cassis, liquorice/fennel, tobacco, graphite, ink/iodine, leather, cloves, bay leaf, pepper. Somewhat medicinal.
Palate:
This is a delicious - although untraditional - Priorat wine with a layered aromatic complexity and an unctuous mouthfeel. The same notes on the palate as on the nose, a bit more obviously medicinal and graphite laden. Full body, balanced acidity, grippy tannins that soften after ~30 min, med-long finish. An elegant, structured rich wine that begs for robust food.
THE WINE + FOOD 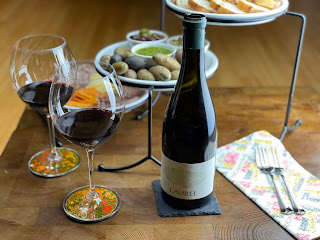 We thoroughly enjoyed this wine with a late night movie and bits and bites - an assortment of charcuterie including finocchiona, a Tuscan fennel-studded variety, Idiazabal, Manchego, and Gabietou cheeses, papas arrugadas, and a refreshing herby mojo verde. The charcuterie and the cheeses certainly were perfect with the wine but the salt-crusted papas arrugadas and mojo were outstanding! The fruit and inky fennel notes  in the wine worked marvellously with the finicchiona and the bright mojo. We have another bottle that we'll hold for a few more years to see how it develops. Another splendid wine from Clos Erasmus, and a must for Priorat red lovers!
Also check out these blog posts and be inspired by what the rest of us sipped and savoured:
Posted by Payal at 1:32 AM