CAHORS: WHAT PUT MALBEC ON THE MAP 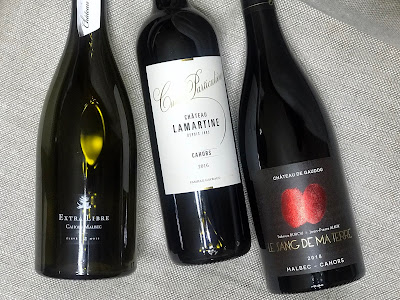 This month the French #winophiles are in Cahors AOC, southwestern France. Nicole of Somm's Table is graciously hosting, and we can thank Jill of L'occasion for scoring us Cahors wine samples through the UIVC (Union Interprofessionnelle des Vins de Cahors) for a few of us. But even without samples, everyone is welcome to join us as we jaunt through Cahors and enjoy the wine! 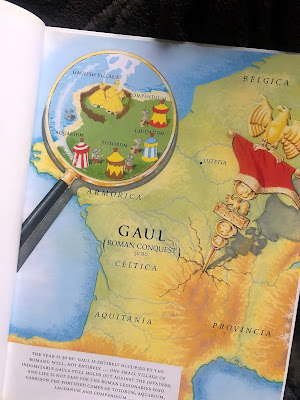 Malbec - aka Côt, Côt Noir, Auxxerois, Pressac, and hundreds of other regional names - is native to France, especially the southwest in the Lot department where it was introduced by the Romans around 50 BC and has been cultivated since then despite a few setbacks  like phylloxera and frost along the way. Incidentally, while the Romans were introducing grapes in southwestern France, they were also capturing Gaulish villages in the area and Romanising them. One village in particular managed to defend itself and remained Gaulish despite being surrounded by Romans and other captured villages. Asterix, the hugely popular French comic series about the resistance of a Gaulish village against Roman occupation, is set in that very village! The village chief Vitalstatistix in those comics is based on Lucterius, a formidable leader of the Gauls who was instrumental in defending the village from the Romans. If you haven't read any Asterix, begin with Asterix the Gaul!

As a grape Malbec is a bit finicky, like Pinot Noir. It is thick-skinned but sensitive to humidity, frost, temperature, and other weather conditions which make it prone to  diseases like downy mildew and "coulure", or lack of full development of grapes. Malbec grapes make deep, inky, intense wine, making it popular as a blending grape for colour and fruit, especially in the Loire, Bordeaux, and elsewhere where Bordeaux-style blends are made. These qualities have also earned it the nickname "black wine" although of course it is not actually black. At one point Malbec was grown in up to 30 departments around France but these days it primarily grows in the small town of Cahors which is the capital of the Lot department and a small town on the river Lot that flows towards Bordeaux. Cahors is a red wine-only AOC, with a minimum of 70% Malbec required in each blend. Grapes commonly used to blend with Malbec are Merlot and Tannat.

In the mid-19th century at the instruction of provincial governor Domingo Faustino Sarmiento, Malbec was planted in Argentina by French agronomist Miguel Pouget. A lot has happened between then and now in the Argentine wine world but it ultimately led to Malbec being the most widely planted red grape in Argentina, which is nearly synonymous with Malbec around the world. And, as I'd mentioned above, Malbec is a fussy grape and hectares of it succumbed to frost and phylloxera around the time it was fledgling in Argentina. Thanks to that serendipitous planting, despite the natural devastation in France, Malbec survived, thrived, and became a fixture on the world wine map, albeit through Argentina via Cahors!

All that aside, Argentine and French Malbec are vastly different wines. The grapes themselves are same but different... tighter clusters and smaller berries in Argentina, e.g. And taste... Argentine Malbec is jammy, fruit forward, with some floral notes, soft tannins and a velvety texture, whereas French Malbec is leathery, with flavors of tart currant, black plum, firm tannins, higher acid, and a savoury meatiness on the palate. The higher tannins and acid in French Malbec yields lower alcohol, age-worthy wines compared to Argentine Malbec.

THE WINE
The Cahors Malbec wines I received were:

The one I opened for this review was the Château du Cèdre Extra Libre (2018) because it has no added sulphites and we couldn't wait to try it! I will review the other wines at a later date.

The grapes for this wine come from vines on the lower terraces with sandy alluvial soil, and from the upper terrace with limestone soil. The grapes are sorted and destemmed in the vineyard, at the winery they're macerated for 30 days and fermented in concrete tanks before being aged in nearly neutral (twice used) oak barrels.

The wine is beautiful in the glass with a gorgeous magenta rim and deep core. On the nose: aromas of ripe red berries, fresh red roses, and cinnamon. On the palate: juicy, same as nose + black pepper, a hint of nutmeg, and a faint minerality, all with mouthwatering acidity and a medium finish. This is a highly quaffable wine with or without food, and quite different from any Cahors Malbec we've had. It is, however, a must to serve it cool, not at room temperature, to get the best of it. 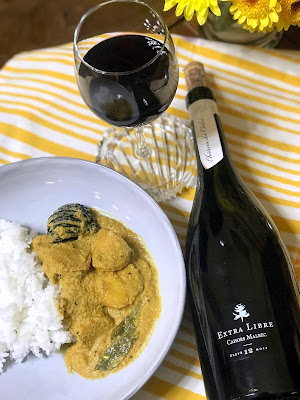 I paired the wine with wild scallop theeyal, a dish from Kerala, India, a coastal state known for its abundant seafood, extensive use of coconut, curry leaves, and fragrant rice varieties. Although scallops are found in every ocean of the planet, they are not commonly found on Indian menus even though India, as a peninsular country, has an extensive coastline. Maybe they are not abundant off the Indian coast, or, like oysters, might be considered "fisherman's food" in India. Like most food from the Indian subcontinent, theeyals are very flavourful but not fiery, and have a distinct deep red colour because of the deeply roasted coconut used in the sauce (clearly, I did not roast the coconut enough, because my sauce was hardly deep red!). In addition to all the spices, the sauce has a pleasant tangy acidity in the background that can come from either tamarind or kudampuli (Garcinia Cambogia), a pumpkin-shaped sour fruit whose dried and reconstituted peels are used extensively in Sri Lankan and Keralan cuisine.

Kudampuli, what I used rather than tamarind, lends a discernible but complementary acidity to the sauce, and actually brings forward the fruitiness of the wine. All the flavours - the roasted coconut, sweetness of the fresh scallops, and the bright and fruity wine - were so delicious that we'll be having more of this!

We'll be talking Cahors on Twitter this Saturday, 19 October at 8 AM PST so join us and be sure to use #Winophiles in your tweets so that we can see your comments. If you can't make it, no worries, you can stop by whenever to see what the other friendly Winophiles have done with Cahors this month while we slowly but sure move into colder weather here in the northern hemisphere: