ISRAELI WINE WITH THE DIVERSE CUISINE OF THE DIASPORA 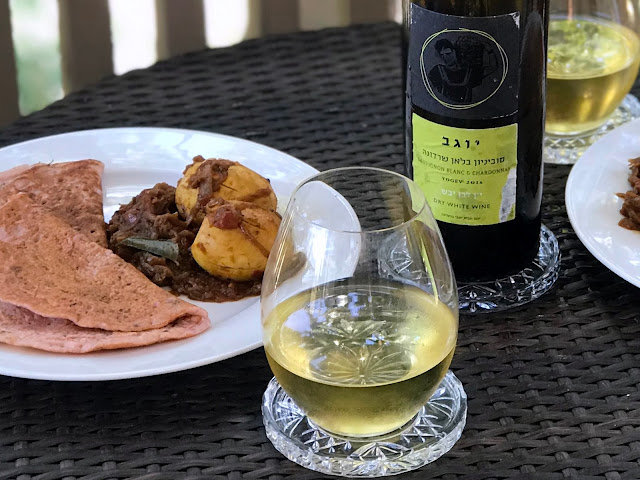 Israeli wine has come a long way from being absent from the global wine map to making  a strong presence around the globe. Viticulture has existed in the area now called Israel since biblical times, and wine was even exported to Rome at one point. However, the entire industry eventually died off with increased Islamic dominance in the area due to their religious rules about wine. Fast forward to much later, the modern Israeli wine industry was established in the late 1800s with the help of Baron Edmond James de Rothschild of the Rothschild banking and wine family but it really only took off after Israel was formed ~1948. Locally made wine was being sold within Israel earlier but it has continued to make a presence in other countries around the globe, although the US remains the primary export destination for Israeli wine.

For further reading, Wines Israel is an excellent resource to dive deeper into Israeli wine, past, present, and future.

JEWS AND THEIR CUISINE IN INDIA
The cuisine of the Jewish diaspora has always fascinated me because of its diversity and the nimbleness with which Jewish people have adapted foods to meet their religious and dietary requirements everywhere they have ended up. This includes India, which philosophically has nothing to do with Judaism but is a famously tolerant place that has offered protections and respect for cultural and religious proclivities to foreign communities who decided to stay in India after initially coming for trade and commerce.

Jewish people came to India initially as traders in the time of King Solomon’s reign (~970 to 931 BC) and stayed, and then after the Alhambra and King Manuel's Decrees which expelled Jews from Spain and Portugal if they did not convert to Christianity. The Hindu monarchs of the time offered numerous privileges to these waves of Jewish immigrants including land grants, tax exemptions, the freedom to speak their language, and freely practice their religion. These Jewish groups established themselves in India, built synagogues, and truly mixed  with the Indian population adopting elements of local  cultural habits and food. All of this was mostly in the coastal Indian states of Kerala and Maharashtra. 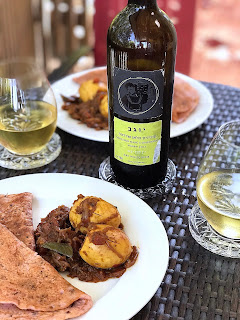 Indian Jews made their own wine, challah, and matzo because there were no Jewish bakeries, and like the Muslims do, they had their own butchers who slaughtered meat per Kosher requirements. As the Indian Jewry left or passed away, so did the butchers, and eventually the communities ate mostly vegetables and seafood along with the abundant varieties of rice, spices, and produce adapted from local recipes.

After Israel was established in ~1948 many Indian Jews emigrated to Israel. Although their centuries old synagogues and houses lay largely vacant in India, they continue to carry forward their synthesised cultural and culinary habits in their newly adapted land. I thought it would be interesting to connect the dots and discover how Indian Jewish food pairs with Israeli wine and ponder over whether the Indian Jews who are cooking their ancient hybrid Indian recipes in Israel ever pair them with local wine as they had done in India!


THE WINE + FOOD PAIRING
2014 Binyamina Winery Yogev, 12.5% ABV
SRP $20
WINE: According to the winery, "Our winegrowers instill their crops with their own individual character, Israeli roots and genuine love of the land, inspiring us to name this Series in their honor. Wines in the Yogev Series have been blended using the finest grapes from the best vines cultivated by our most outstanding winegrowers. Simply put, this is the very essence of our wines." The wine is an 80-20 cepage of Sauvignon Blanc and Chardonnay from the oldest vineyards in the Upper and Lower Galilee, and strives to be a "harmonious fusion between two noble varieties".

Regarding the wine-making process, the winery says, "The Sauvignon Blanc grapes are harvested two weeks after the Chardonnay grapes. Both varieties are brought to the winery and immediately pressed to extract the best quality free run juice and maintain freshness and aroma. After a natural clarification of the must, the wine is transferred for a slow alcoholic fermentation at low temperatures. The wine is then transferred for brief storage in stainless steel tanks until selection of the final varietal blend. Contact with oak is deliberately avoided in order to maintain maximum freshness. The wine is bottled after filtration and is released after briefly aging in the bottle."
NOTES: We thought that the wine is a beautiful medium lemon colour, clean with a medium intensity and predominantly citrus + white flower on the nose. On the palate it is crisp, medium-bodied with a juicy medium acidity and intensity, and grapefruit/lemon and pear notes with green apple and orange blossoms in the back palate ending with a medium finish. Overall this is a simple wine and considering that this has no oak aging, I can't see how it would age well beyond 2020. 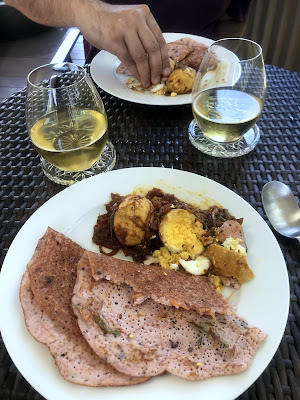 FOOD: We enjoyed the 2014 Yogev with a lovely Keralan lunch of ponganam (rice+lentil crepes) and mutta kari (egg curry) from the book Spice & Kosher. The wine paired exceptionally well with the warm herbaceous of the curry leaves, the smoke of the toasted black pepper, and sweetness of caramelised onions in the curry along with the slight tang of the crepes made from a fermented batter.

FUN FACTS
The egg curry recipe is from Matilda Davidson, from Petah Tikva, Israel, a city that started small but became a permanent settlement in the late 1880s thanks to financial help from Baron. As I've mentioned above, he also helped establish the modern wine industry in Israel.

The word "curry" is anglicised from kari, a Tamil word for dishes seasoned with leaves from curry plant and meant to be eaten with rice or crepes. Kari isn't always saucy, and can be sweet or savoury. There are also 1000s of different kinds of crepes in India, and since rice grows exceptionally well in the wet humid climate, it dominates southern Indian cuisine so the crepes in South India are all rice and/or lentil-based. Seafood also aplenty, and each region has it's favourite fish. Also, in India oysters are considered poor fishermen's food so they never make it to the markets!

Pop over to the websites of everyone below to see what they've done with their Israeli wine and food pairings! And then come talk about it at #WinePW on Twitter on Saturday, 23 May @8 AM PST.