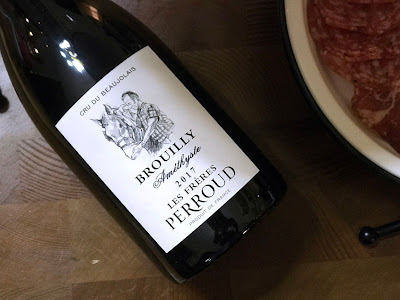 This May the French Winophiles are exploring Cru du Beaujolais. All 10 crus, so lots of options and lots to look forward to. The Beaujolias crus are stacked between Burgundy (north) and Rhône (south) and offer an exhilarating variety of wines to try, warranting a tasting dedicated solely to Beaujolais! 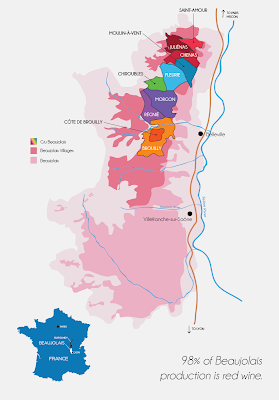 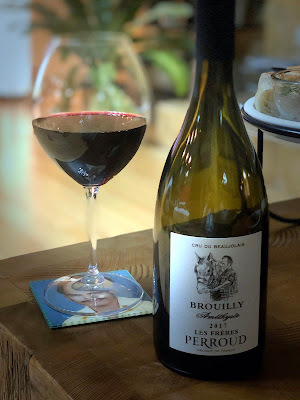 Cindy from Grape Experiences is our host this month, read her preview post here to find out more about the finer points of Cru Beaujolais.

CRU BEAUJOLAIS: BROUILLY
I had originally thought of doing a north-to-south tasting of all 5 Cru Beaujolais wines we've got in the cellar, which would've been a great way to really highlight the nuances of each cru. But I've put a weekly limit to the number of alcoholic drinks we're allowed, and the virtual socialising has been adding up so there's no way we could've done the full tasting *and* the social hours and stayed within our limit. The upside to all the socialising I suppose, is that no one is taking their relationships for granted and everyone is going out of their way to keep in touch, including us, even if it is just a check-in to say hello. Everything is virtual nowadays, even meditation sessions! Although, I chicken out of those every week - I have done yoga and meditation since a young age, but I just cannot truly meditate in front of a screen.

So I settled on a Brouilly for our May 2020 #winophiles tasting. Brouilly is the southernmost of Beaujolais crus, and at 1,315 hectares, is also the largest, with ~20% of the total Cru Beaujolais area. The wines are fresh, fruity, can be enjoyed young or aged up to 10 years, and are easy to pair with  various savoury foods. And, as is the case with all of Beaujolais, a great value for $$$. The only red grape allowed in Brouilly is Gamay, with Chardonnay, Melon de Bourgogne, and Aligoté allowed up to 15% in a blend. The four different types of soils on and around Mount Brouilly allow nuanced wines that can fit every palate. There is a long history of superior wine making and as far back as 1769, Brouilly was producing elegant wines that were authorised to be sold to Paris. Certainly a feather in the cap at that time.

I was introduced to Beaujolais and its wine-making communes when I took a wine class during my undergraduate years at Purdue Univ. In the early 2000s IN did not have much going on by way of wine but the class was incredible. The professor had been a wine consultant with American Airlines for decades prior so we always had the best wines in class and reps from all over who came to lecture, including Dom Perignon and other premium champagne houses. And every class included food pairings with the wines - looking back, I'm amazed and impressed at the effort and enthusiasm Prof. Vine put into the class. 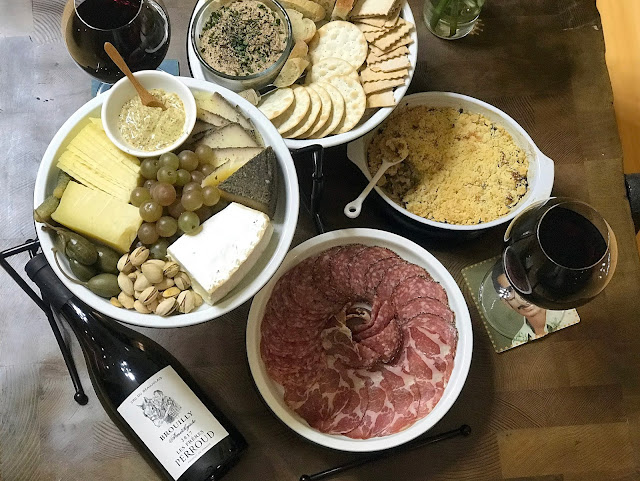 The Perroud brothers grow the grapes for the Amethyste wine on the southern slope of the Saburins hill in Quincié village, one of the six villages of the Brouilly AOC. The wine is named as such because of the crystalline amethyst layer deep in the soil.

The wine is 100% Gamay and is aged for one year in Burgundian neutral oak barrels. According to the winery website, this wine is best between 2018 and 2032, so we definitely had it on the young side of that time period. Nevertheless, it is a beautiful ruby coloured wine, with aromas full of berries black and blue, ripe purple plums, cooked ripe raspberries, and a hint of black pepper in the very back. Same on the palate, with plush tannins and juicy acidity. The finish is medium and overall the wine is balanced although a bit simple. A splendid wine that I'd love to try again in a few years to see if anything has changed.

We enjoyed it with a classic Beaujolais pairing of charcuterie, cheeses, a goat cheese and leek crumble, and sardine butter. All the food was an expectedly incredible complement to the wine. Even the sardine butter which is silky and more buttery than briny or fishy. We actually had Coravined two glasses to start, but the food and wine were so delicious together that we ended up opening the bottle.

See the links below to find out what my fellow #winophiles are saying about the Cru Beaujolais wines they chose and the superb food pairing ideas for each wine! Join our Twitter chat on Saturday May 16 from 8 - 9 AM PST at #Winophiles. Hope to see you there!
Posted by Payal at 4:47 PM